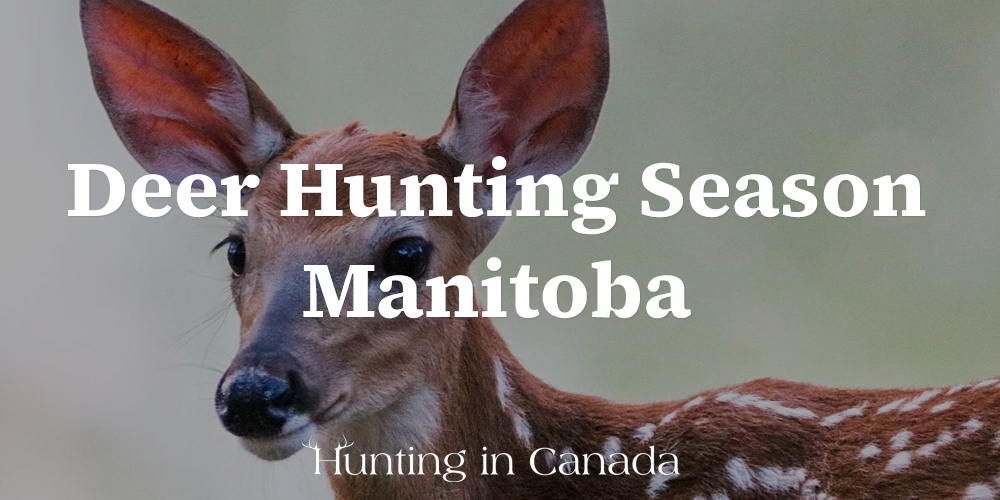 If you are interested in Deer Hunting Season Manitoba, then you are in the right place. Deer hunting can be a challenging experience, but it is also a fun and rewarding way to spend time outdoors.

Deer hunting offers a special type of adventure. For that reason, hunters take to the woods each year in hopes of hunting a deer. In this blog, you will learn more about the deer hunting season in Manitoba, hunting licences, and what is chronic wasting disease.

Manitoba is a province of Canada. Winnipeg is Manitoba’s capital and largest city. This province has an abundance of wildlife, such as whitetail deer, moose, wolves, black bears, and caribou.

Although it is considered one of the top destinations for black bear hunting in North America, Manitoba’s whitetail deer hunting is another big draw, along with caribou and moose. Hunting white-tailed deer offers one of the most diverse hunting experiences available, with some bucks tipping the scales at 250 pounds.

Hunting White-tailed deer is popular in areas of the Eastern Region, Western, Central Plains Pembina, Parkland, and Interlake. Depending on the Game Hunting Areas (GHA’s), hunting season dates are primarily during the months of September through December.

If you want to hunt, it is mandatory to have a valid licence for the species you are going to hunt. While hunting, you must carry your Hunter Education Certificate, the licence and any associated game tags.

Also, they must be accompanied by a licensed Manitoba guide, with a maximum of 3 hunters per guide. A foreign resident hunter must only use the outfitter’s services specified on his hunting licence.

On the other hand, non-resident hunters are not required to book their hunt through a licensed outfitter except for caribou hunting.

When it comes to game bird hunting (upland game bird and migratory game bird), both non-resident and foreign resident huntersdo not require the services of a guide.

Hunting Guidelines to Prevent the Spread of Chronic Wasting Disease

CWD was first detected in Manitoba in 2021, it was found in 5 mule deer along the Saskatchewan border. It is an incurable and fatal disease that affects animals in the deer family, including elk, deer, and moose.

Although it is not a known human health risk, people should not eat meat from infected animals. Hunters are urged not to consume the meat until the CWD test results come in.

To limit the spread, Manitoba is expanding the area from which hunted deer samples are taken. Parts of the harvested animal are required for testing, including the upper neck and head. The hunter may keep the animal antlers.

When submitting a sample, the hunter is expected to provide information about the location and the date of the hunt. And how to contact them in case the test result is positive. If the sample tests positive, the hunter will be notified immediately by phone.

Any hunter in the mandatory sample submission zone must provide tissue samples from mule deer, whitetail deer, elk, and moose. And they must submit it within 48 hours of harvesting. This way, the province can identify the infected animals and determine if the CWD is spreading.